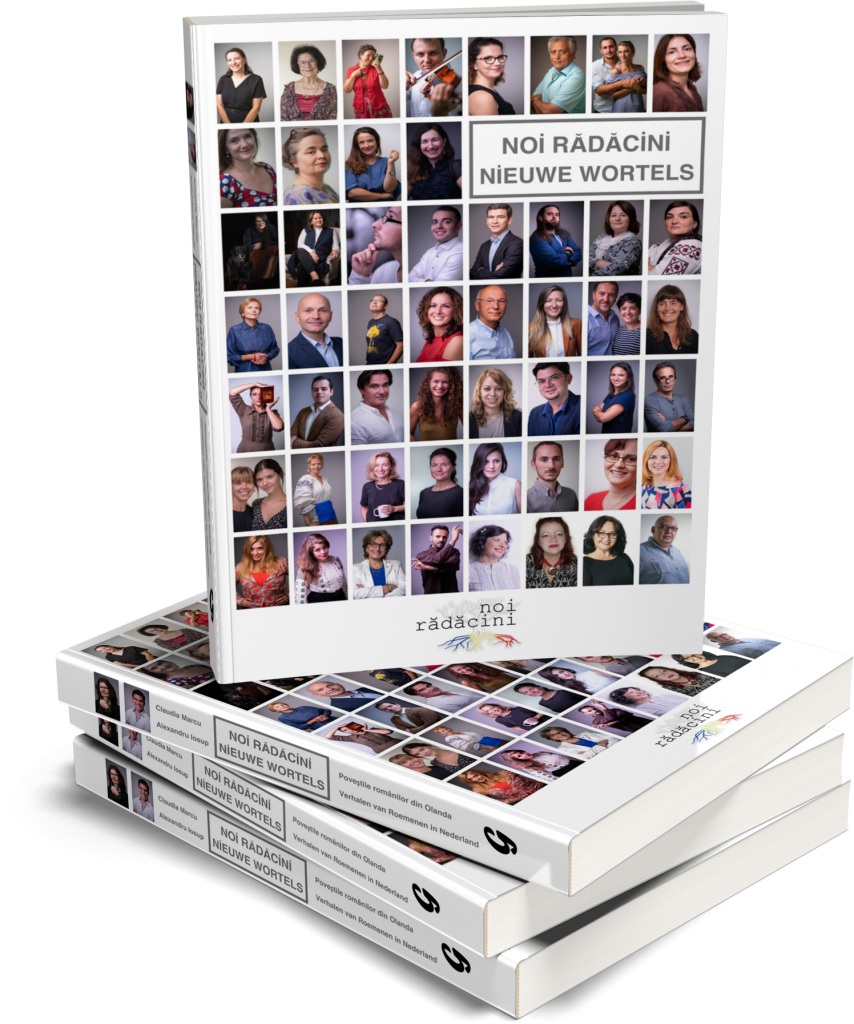 After having lived for so many years in the Netherlands, we have started to appreciate the idea of a Romanian community, and to understand that it would be good to know and learn about each other, about who are we, why we are here, and why we feel good in this country. Pursuing this idea, Claudia and Alexandru met to discuss for the first time about the project at a social event organized by the ROMPRO Foundation (ROMPRO – Fundația Români Pentru Români Olanda) in the Hague, at the Romanian Embassy in the Kingdom of the Netherlands.

We then discussed doing a series of interviews with people from the Romanian community, to show the remarkable diversity of these people, but also how diverse is their understanding of doing well, of feeling good, and of being successful. Our ideas were not clear. We did not discuss the details. We couldn’t have even imagined them.

When you start from scratch a project based only on unpaid volunteering, and when that project gets to over 300,000 words, you cannot think through about all the concrete problems. But you can think about the most important thing: that you want to create a good, useful project, that will benefit the entire community. It was so that our independent project, New Roots (Noi Rădăcini), was born. Over time, we crystallized this project toward a way to understand ourselves, the Romanians living in the Netherlands, both individually and as a community.

In short, this project is a collection of 52 interviews with and about Romanians who feel good in the Netherlands. The interviews are similarly structured and are published weekly on the project’s website for exactly one year. Moreover, there is also a book.

Second, through the positive stories it presents, Noi Rădăcini also tries to emphasize that Romanians are not always seen in the Netherlands in as good a light as they deserve, that there are many wrongful objections to their presence in the Netherlands, for example among the supporters of xenophobic parties. Noi Rădăcini wants to be a credible source of information for the Dutch people, focusing on the good things Romanians actually do in the Netherlands, from things that are tangible and easy to appreciate to less tangible ones that nevertheless make the Dutch society work.

There is also a third reason for Noi Rădăcini to exist, a reason perhaps only meaningful to the authors: we were and remain curious about Romanians living in the Netherlands. Who are these beautiful and courageous people?

How does Noi Rădăcini reach its goals?

From the very beginning, we designed Noi Rădăcini as starting from a process of collecting through journalistic and ethnographic methods the narratives of Romanians living in the Netherlands, with the full agreement and collaboration of the interviewees. The main instrument is the personal interview, through which we learn how our interviewees reflect on their own past adventures and current situation, at their successes and issues related to integration, at their overall story of success, and at how their own idea of success has evolved since arriving in the Netherlands. The interviews lead in general to about 30 minutes of useful material, each extracted from a longer session. After recording it, the material is transcribed, translated into English and Dutch, edited, and published online together with a short sound-clip and photographs from personal archives. Why also a sound-clip? Because the authors believe that people can be better understood by hearing their voices and their inflection.

Whom else is the Noi Rădăcini project, in website and book formats, intended for?

For the guests of Romanians living in the Netherlands – almost like a business card. For Romanians who are thinking about moving to the Netherlands – a handbook of positive models. For Romanians living abroad, in general, it’s a discussion between the Romanian communities across the world. For those who can change their opinion about Romanians. Even for everyone who is interested in learning about courageous people who emigrated and feel good where they took new roots.

When did Noi Rădăcini start and what were its milestones?

The actual project begins on June 10, 2016, the date of the first discussion at the Romanian Embassy in the Hague. On June 11, the project acquires an interview structure. Many discussions and ideas follow, interrupted by the regular flow of life, so only in the week of November 14-20, 2016, we send invitations about the first interviews, and only on January 23, 2017, Claudia and Alexandru conduct their first interview-visit together, interviewing Ioana Biriș. In April 2017, we compose the first presentation of the project, entitled “Drumul Spre Succes”; the name changes to “Noi Rădăcini” on August 6, after many rounds of ideation, and from September 29 we let the term “success” disappear from the title, motivated by its slightly negative connotation in the Dutch culture. On December 8, 2017, we launch the website, and publish on it the first edited interview, with Liana Șerbescu as an interviewee. We get into a rhythm and publish weekly, experiencing all the problems associated with a long-term volunteering project. Thanks to an exceptional team of volunteers, everything succeeds. We start working on the new sub-projects: on June 25, 2018, the book, with the help of Jan Willem Bos; on July 12, 2018, Ghio Coste offers his help to redo the website; in August through September 2018, project financing and especially crowdfunding (helped, again, by Ioana Biriș).

The narratives are gathered in a book, aimed to reach those who prefer it to the online medium. The book and the last interview of the first year will be launched simultaneously.

But there is more: our project could be extended also by and in other Romanian communities across the world, e.g., in Canada, France, Germany, Italy, Spain, Switzerland, the UK, the US. We are already discussing this idea and we will actively promote it.

About the Noi Rădăcini book

Noi Rădăcini is a collection of similarly structured interviews, a bilingual volume written in Romanian and Dutch, which took our team of volunteers over two years to complete. The book will be presented on December 8, 2018, in the wide space of the Deventer Library (read here about the launch and how the book can be ordered). 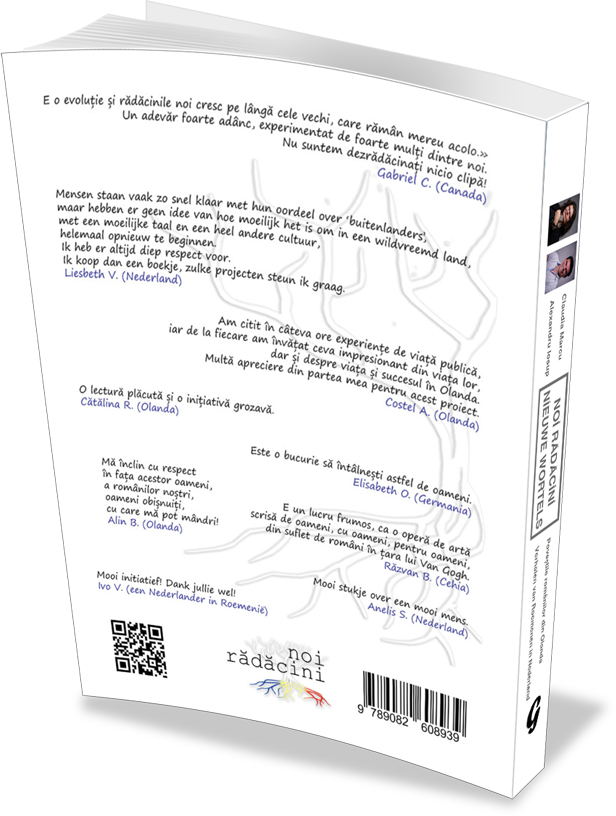 Claudia Marcu is co-initiator of both the project and the book Noi Rădăcini. Claudia is a radio journalist, with a vast experience of over 28 years of work in this field. She was the Radio România correspondent in the Netherlands for over ten years. Currently, she collaborates with Radio România Cultural and is developing her own cultural and touristic programs.

Alexandru Iosup is also co-initiator of both the project and the book Noi Rădăcini. Alexandru is a full university professor at VU Amsterdam and associate professor at TU Delft. He is a selected member of the Royal Academy of Arts and Sciences of the Netherlands – De Jonge Akademie. Alexandru received recognitions such as the title of Higher-Education Teacher of the Year and of the ICT Researcher of the Year in the Netherlands.

Jan Willem Bos is the co-author of the Noi Rădăcini book. He is a Dutch-Romanian translator and interpreter. He has translated into Dutch nearly 30 books from the Romanian literature and has written books on topics focusing on Romania, including dictionaries. For Jan Willem, “Romania is a daily concern.”

Mihaela Niță has edited the interviews for publication in Romanian and has translated many of them into English. Mihaela is a translator, editor, and researcher.

Alina Mărginean has participated in translating interviews into English and offered many good ideas related to the name and visual presence of the project.

The translations into Dutch were done by Jan Willem Bos and Daniël Schenkeveld. Daniel was born in the Netherlands, but his heart beats also in Romanian. He has a passion for foreign languages, new cultures, and traveling. He is always looking for new adventures, so it was not difficult for us to convince him to help with Noi Rădăcini.

Some of the photographs are kindly offered by the interviewees from their personal archives. These photographs have been edited by Alexandru Matei, photography lover and graduate urbanism expert.

Cristian Călin created photographic portraits of all interviewees, he contributed to the Noi Rădăcini book design, and in general, he helped improve the image and presentation of the whole project. His contribution to the project was outstanding.

Ștefan Postol created the Noi Rădăcini logo. Ștefan is a mural artist who works fervently and who exhibits frequently his work in Amsterdam and other cities in the Netherlands. His favorite project: the workshop where he teaches plastic arts to youngsters, which welcomes children with Romanian roots.

The Restart Network team made the first website of the Noi Rădăcini project. Restart Network is a non-profit organization whose mission is to facilitate and accelerate inclusiveness and diversity in IT. Restart Network students are refugees, minorities, and under-represented groups in this industry.

This project has been supported by several organizations:

The ROMPRO Foundation encouraged, guided, and recommended us to others; the Romanian Embassy supported us unconditionally through the two ambassadors – Ireny Comaroschi and Brândușa Predescu – present during the course of this project, as well as through Isabela Dragnea; Roemenië Maar Dan Anders helped us with advice and hands-on with the crowdfunding process; RoemWijn helped us organize the first public event of the project, long before Noi Rădăcini became known and appreciated; Radio Romania Regional helped promote the core idea of the project. We thank them all also through this medium.

Several other special persons have contributed to this project: