“”I’ve learned to be tolerant and to have other goals. If, in Romania, my aim was just the well-being of my family and to be a good artist, here, I want to become a complex person, I want to be more in touch with nature – ironically, since in Romania there is so much nature, but it’s not given to us. I’m happy here, the Netherlands is humane.””
Ştefan Postol graduated the art in Romania, being specialized in industrial design, art pedagogy and art therapy. After graduation, he went to see the world. He drew caricatures and street portraits in most of the European countries, he executed mural paintings, restorations and paintings in the U.S.A., Hungary, Morocco, Spain, Austria, but he always felt the need to go back to Romania „for that local energy from Crişana, from Banat”. Until 2015, when he settled in Amsterdam: „ now that energy is not important anymore. Now I feel one with this place”. The artist Ştefan Postol feels now at home: he works intensively and he frequently has exhibitions in Amsterdam and other Dutch cities. His favorite project: the Arts Atelier for children, especially open for children with Romanian roots.

I felt the need to leave my country. The Netherlands wasn’t necessarily my favourite destination. I would have prefered it to be France or Belgium, somewhere where French was being spoken. I joined on Facebook groups for Romanians from France and Belgium. My wife and I were very determined to leave the country, no matter what. We wanted a better future for our children. The system in which we lived and in which our children were also supposed to enter was capped. My child was labeled “bad Tudor” in school because he happened to scratch another kid. I didn’t want him to live with this label. I didn’t want, whenever I went into a tank station, with my long hair and my blue jeans, to be labeled a thief; all eyes were always on me to check if I stole something. There are several reasons that made me decide to leave.

We left in a simple way, with a car in which we put all of my wife’s, Elena’s, stuff, together with my colours, without any capital. Elena is a nail artist and I’m a painter. So, half of the car was full with Elena’s colours, the other half with mine.

I was advised to join also a group for Romanians in the Netherlands. There, I saw an ad in Romanian for a nail artist. It was obvious the poster was a Romanian, we contacted her, we made a deal and we left. Just the two of us, our children stayed in the beginning with our parents, they were going to the village kindergarten. We came here for three months to see what it’s like.

It was very difficult. We arrived here sometime in April, it was very cold, the lady who needed a nail artist offered us also a place to stay, a holiday house. In the Netherlands, it is common to have one; they are small, ecological houses. We didn’t come here on a stable contract that would give us a certain stability and security for the future. But we stayed here.

Now, Elena and I are a team, but in the beginning she was the provider. We lived off what she managed to earn. It wasn’t much, but we knew the situation would change, that it wouldn’t last forever and that, eventually, we would do what we like, what we love. This was our goal and we went forward. After four months, we returned to bring our kids over, we applied for their passports, and we all came here. Why?

I used to travel a lot, as an artist, I worked for a long time as a street portrait painter. In the summer, I used to earn my living from street portraits, caricatures, so I travelled a lot through Europe, but also in Casablanca, in Morocco, in the US, etc. The feeling that Amsterdam gave me was that of safety, I felt that it would be OK. When you hear about the Netherlands, you think about Rembrandt, the Golden Age of painting, windmills and other touristic attractions, but when I arrived here and I felt the vibration of the city, I told myself that it is obviously a city for artists, a civilised city. I often heard that Amsterdam is full of drug addicts that sleep on the streets, none of that is true. Amsterdam is a very dainty and very well-maintained city, where you come across art at every turn.

We have three children who are very united; this made the transition much easier for them. On the other hand, they instantly took to the educational system like a duck to water. David, my oldest, came home from school one day and told Elena: “Mom, here kids don’t make fun of each other when they change clothes for gym”. These reactions of our children help us understand what school is like, but also what the society is like in the Netherlands.

What were your first achievements after arriving here?

It’s well over two years since we’ve arrived. I have to say that, in the beginning, I got scared when I heard from other artists that they managed to assert themselves after well over five years. To me, it seemed a very long period, even university took less, I studied art education. But I understood quickly how the social network functions here and I can say that after two years I managed to assert myself as an artist. Elena has her own clients now, our kids have adapted very well. It was difficult in the beginning, but the adjustment happened very quickly.

In Romania, I was a thematic artist, I was making artificial rocks, murals, pretty much everything. I worked on commission. When I arrived here, I did a lot of murals, I promoted myself as a mural artist and my first mural in the Netherlands was for Romanians, after only three months since my arrival. Many more followed, after that I had my first personal exhibition, just ten months later. Now, I have had more than three personal exhibitions, I participated also in a very important group exhibition, which brought together more than a hundred street artists from all over the globe.

As an artist, does this country inspire you?

I’ve mentioned that I went to many countries, all very different, where I felt very well, but I was always drawn back to Romania. I wanted France in the beginning, because I believed that France is the suitable country for artists. I also lived in Barcelona, where our second son was born, a right place for cultural development. But I’ve never felt the need to leave Amsterdam. On the contrary, when I’m in Romania, I can’t wait to get back to Amsterdam. I think this is the best place for me.

What did success mean to you before you left Romania and what does it mean now?

When you’re in Romania, even if you’ve been abroad here and there, you will eventually fall into that pattern: a house, a car… Although it’s tempting, I’ve never thought of success in this way, but I cannot say that I wasn’t influenced. This is how I got here, by being influenced by that Romanian model of success. Of course, it is important to have a roof over your head, to have your own nest, but everybody has that. Here, success comes from somewhere else. You can say you haven’t lived in vain when you’ve managed to do something for yourself and for the others.

I have kids [students, ed.] that I teach how to draw, to paint, and my optimism is an example for them. One of the kids even asked me: “Ștefan, are you an optimist?” “Yes, but why are you asking me?” “Because I am very pessimistic,” answered the kid. With the help of a drawing, I helped him get over his mood, which was unjustified in his case. 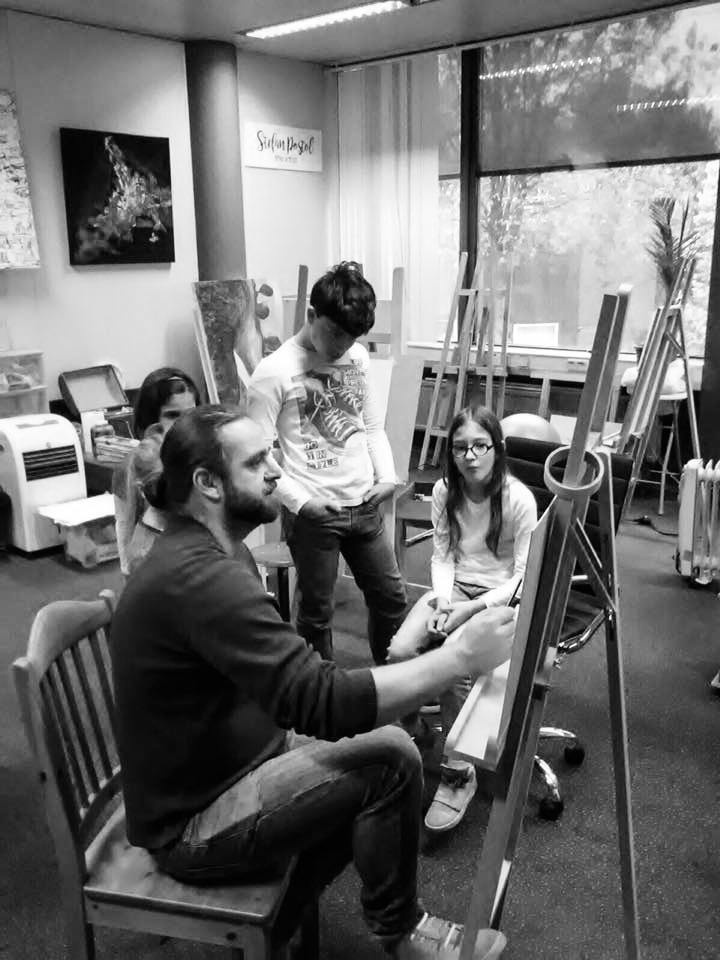 What’s your relationship with the Romanian community in the Netherlands?

I feel I belong to this community. I must say that it’s not a large community, like those in Spain and Italy. In the Netherlands, the community is smaller, but those that come here are above middle class, and by that I mean their education and the activities they are involved in.

I feel they want something for their children, they do not enroll their children in my classes only because it is fashionable. I feel that parents really do invest in their children. In my studio, I work only with Romanian children, because my technical vocabulary is in Romanian and I can express myself much more easily, but now I have more requests and I will probably begin with English classes, as well.

What have you learned here, in the Netherlands?

I’ve learned to be tolerant and to have other goals. If, in Romania, my aim was just the well-being of my family and to be a good artist, here, I want to become a complex person, I want to be more in touch with nature – ironically, since in Romania there is so much nature, but it’s not given to us. I’m happy here, the Netherlands is humane.

What would your advice be to a Romanian who would like to come now to the Netherlands?

I can’t give any advice. Most people come here with a solid contract, not like we came. Our case is rather peculiar. You can’t just leave so recklessly, you should know how to do a job that brings you profit, so you can pay your rent and your daily groceries. Here, there’s no sleeping under the bridge or in parks, nobody rents you a house without an employment contract that is proof you can afford to pay that rent. 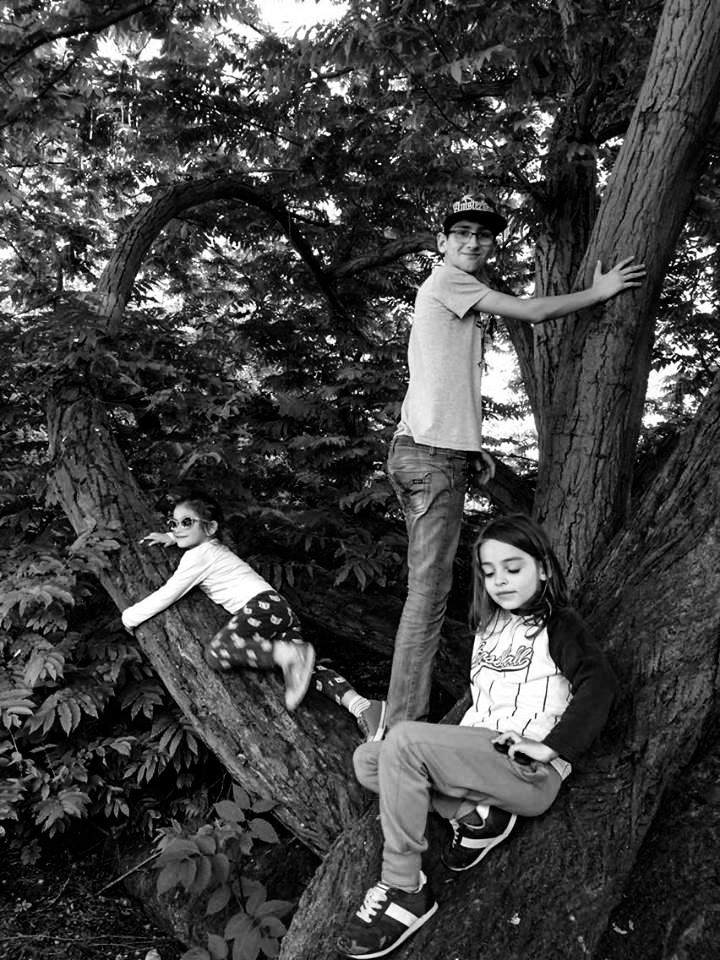