“”The biggest reward is when a Dutch child thanks you for the lesson and they wish you a nice weekend. And there’s something else I like. Sometimes they come and ask me “Are you looking forward to the lesson? Because we are!” That’s a big deal for Dutch kids … “”
Sorinela Ciobîcă studied History and Cultural Anthropology in Sibiu, at the Lucian Blaga University. A happy event brought her in the Netherlands in 1998, where she continued her studies. After a master in European Culture at the University of Groningen, she went at Fontys in Tilburg to obtain the second degree in education and another master to go also for the first degree. Sorinela Ciobîcă is very active in the life of the community and especially at the Romanian School in Eindhoven.

I came to the Netherlands 20 years ago. I never dreamed of leaving Romania. I’m from Sibiu, a relatively small city. For a while, I also lived in the countryside. It was love that brought me here. I got married and my husband was invited to do a Ph.D. here, so he asked “What are we going to do, shall we go?” And I said “We’ll go, what can we do?” So we came here. He worked at the Eindhoven University of Technology, he did a Ph.D. in chemistry, and I followed him. That was in 1998.

I had just finished university and hadn’t found a job yet. My dream was to work at the Romanian Peasant Museum, but back then I couldn’t find any openings, so for a while I worked as a journalist, collaborating with an odd publication. I studied history and cultural anthropology in Sibiu, and my husband had already begun his Ph.D. in Bucharest, so initially I followed him there. I would say I had a cultural shock in Bucharest, not in the Netherlands. Personally, I didn’t leave anything behind, as far as my career was concerned. Of course, I did leave my family behind, my parents, my twin sister, but without it being a painful parting. I was very much in love and my personal relationship had precedence.

Tough. I was shocked a few times. An example would be the bank-cards – back then, that just didn’t exist in Romania. When I got here and I opened a bank account, I was given the card. I just didn’t dare to go and withdraw any money. My husband was telling me that I could even use it when going to the grocery store, but I was too intimidated by those machines.

Jokes aside, I was very lucky because the Ph.D. students formed a big, international, and very friendly community. I made a lot of friends back then and we were like a big family. We would go out together to the movies, have a picnic, go on trips, we’d invite each other to Romanian, Brazilian, and even Dutch dinners. I stayed in this international circle for about a year, after which I told myself that I have to have more contact with the Netherlands. So I started to look around, to see what I could do. But before I could get an idea, I got pregnant, so there wasn’t anything much I could do anymore.

When Ana (the daughter, ed.) was still a baby, I resumed my search. I found in Groningen a master’s in European culture and I thought to myself that it was the best fit given what I had studied in Romania, both history and cultural anthropology. The distance between Groningen and Eindhoven is considerable, but I said to myself that I have to find a solution. We took Ana to the nursery at the university, my husband would take her there in the morning, and I would wake up every day at five o’clock and take the first train to Groningen. That’s how I did my master’s, which took a year and a half. When I look back now, it seems hard, but back then what I was doing seemed normal.

After that, there was another period of searching because I didn’t know anymore what to do, what to pursue. I finished the master’s and now what? And I told myself that there is no other way without learning Dutch. So, with little Ana on my bike, I would cycle to class. I must say that, as a Romanian, I was terribly scared of bikes and I was afraid to cycle with my child on the bike. There was a special nursery, catering to foreigners’ children, I would drop her there, and I would go to language class. In a year and a half, I managed to learn the language so well that I could sit the state exam of Dutch as a second language. And then I asked myself again what to do next, after so much schooling. I had studied history, anthropology… Then, I said to myself “Why not try to work in the school system?”, especially since I already had to do a pedagogical module when I was at university.

In Romania, my supervising professor told me that I had a talent for teaching, although I was aiming for the museum, as I said. I remembered what that professor said and I told myself that maybe he was right and that it would be good to try to work in the school system. Back then, Romania wasn’t a member of the European Union, so I couldn’t gain recognition for my diploma and become automatically a teacher. I was advised to go to Fontys University, where I took a couple of supplementary courses. I had to take some exams, including the Dutch language exam for teachers, which, embarrassingly, I had to take four times. But, on the other hand, my colleagues also failed the exam, just as I did, so it’s also to their embarrassment. At least I had an excuse.

I managed to get a second-degree diploma as a history teacher and I wanted to go further and get the first-degree one as well, even though that’s not really usually done around here. I started sending letters to different schools, I got to know more people who were already in the system, and through a happy conjuncture, I managed to get a teaching job at a school in Veldhoven, near Eindhoven, where even today I’m still teaching history and life stance – it’s a combination of cultural anthropology, philosophy, religion, and culture. Again, the ideal combination for me. I feel very well here, I have really nice colleagues, great at their job, I have students who are good, some who are less good, just like anywhere else.

What’s it like to work in the Dutch school system?

It’s well known that the Dutch students are vocal and sharp-tongued. They’re very critical and they’re very open. If they don’t like something, they’ll say it to their teacher’s face. “It’s boring, I don’t like it.” My course is not part of the exam curriculum, and the students’ attitude towards this kind of subjects is more relaxed, they’re not always in the mood or interested, and I have to struggle with this attitude.

Moreover, there’s also my accent when I speak Dutch. I sometimes get criticized: “Jufvrouw Sorinela, where is the verb?” I usually tell them during our first lesson together that I’m not born here, that I learned the language pretty late in life, and that they may think it’s funny how it sounds. I’ve been working at this school for almost ten years and I don’t think it’s been that many times when my students didn’t understand what I said. The biggest shock is only during the first lesson, when I tell them who I am, where I come from, and why I don’t speak the language perfectly. In the beginning, their reaction was more intense, but now I’m already known there, they have brothers or sisters to whom I’ve already taught, and I’ve noticed that the reaction is not as strong anymore. Now, they know I’m not the Bogeyman, and nor do I eat kids on toast.

The biggest reward is when a Dutch child thanks you for the lesson and they wish you a nice weekend. And there’s something else I like. Sometimes they come and ask me “Are you looking forward to the lesson? Because we are!” That’s a big deal for Dutch kids because they generally don’t feel like doing anything. They’re teenagers for whom nothing is cool anymore. It’s a miracle when they tell you they’re in the mood for class. 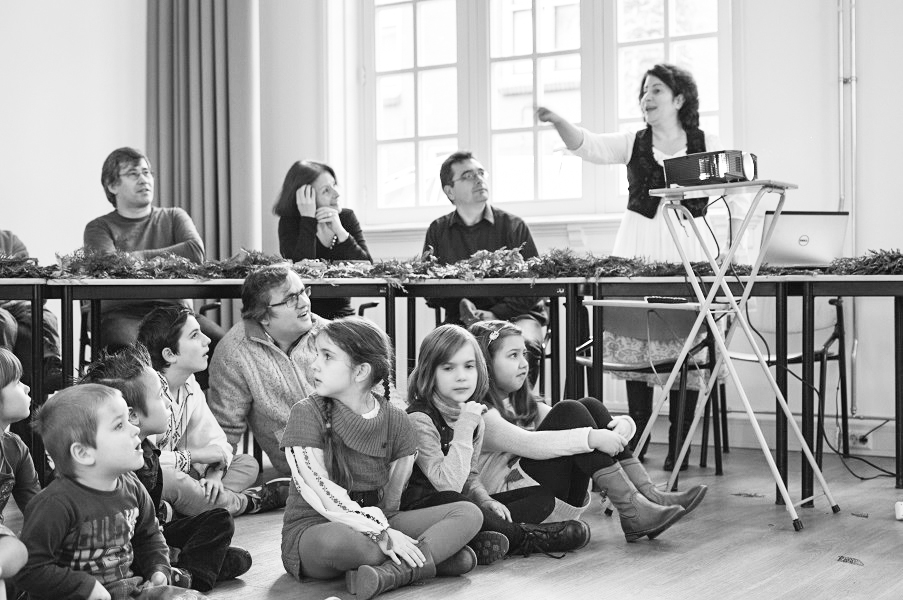 I’m now wondering how on Earth I was able to do all that, how come I had all that energy? Back then it seemed normal. This is the place where I feel at home, where I’ve grown up, where I’ve become the professional that I am. Maybe I would’ve had the same opportunities also in Romania, but it so happened that all this unfolded here, in the Netherlands.

What do you like about the society in which you live?

What I like and annoys me at the same time is the fact that they’re straightforward. I like it when I’m told to my face “That’s not how it works.” But it also annoys me because in Romania nobody would have said that to me. There, people have a roundabout way of dealing with you, without you being able to understand what they meant in the end. [Here], if they see that you take that criticism into account and you develop based on that, that will earn you ten points. I like that a lot. They’re open, straightforward, their criticism is constructive. The streets are clean, the people are polite, they smile at you, I like it.

On the other hand, it’s possible to be unfortunate enough to meet people who are intolerant, xenophobes, who are against foreigners, but who don’t make up the majority, fortunately.

That’s the most difficult question. I never thought that I’d like to be successful. I think a person should find their spot. Whether that may be in Romania or elsewhere, it doesn’t matter. I’m now convinced that I found my spot.

I began by teaching history at the church. That’s how I met a lot of Romanians living in the Netherlands. I’m amazed at how many Romanians continue to come and with such enthusiasm.

I think it’s a beautiful and tight community, we communicate nicely, but of course, there are also cliques, there’s no other way in a Romanian community.

We set up the Romanian School, recently we’ve also started a book and identity club, and our newest project is the bee. We’re a big family. We need such a community, we need to keep our identity – for ourselves and our children. 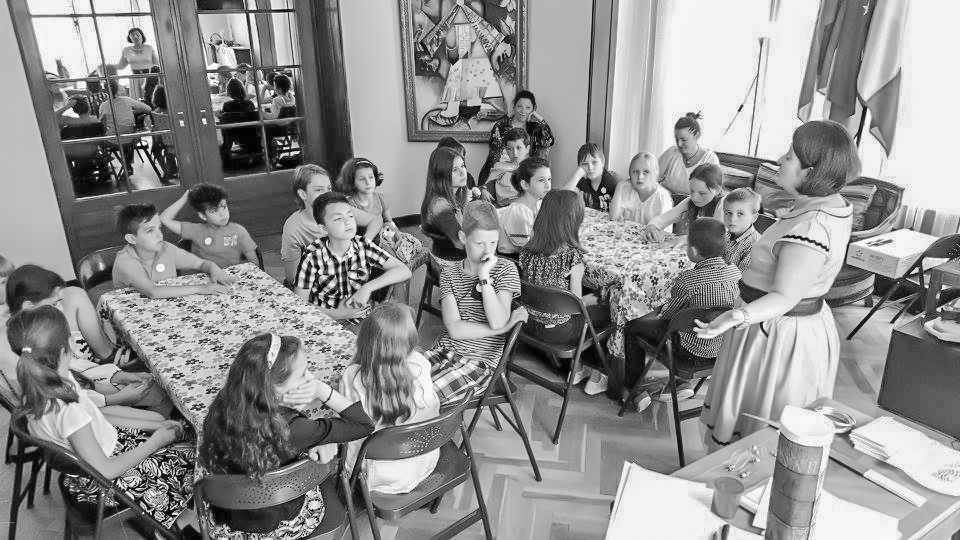 You would say teachers are good at giving advice, but not me. It’s a decision that leaves a mark on your life for good. You can’t easily say “I changed my mind, I’m going back.” just like that! Think well about what you’re doing, get informed because information is vital, you have to know where you’re going, what kind of society it is. You have to expect also difficulties. You can’t say “I graduated with honors, so I’ll go and they’ll roll out the red carpet to welcome me.” The language is very important. When you understand the idioms and the proverbs, or the wise men’s sayings, so to say, only then you can say that you’ve learned a language.