“”To me, all these years represent a journey of development because I feel very good here, I’ve always felt good from the very first moment. Many people ask me what I find so special about the Netherlands. I think that this country has a very favorable environment for business and personal development. For the simple reason that nobody bothers you. If you are good and talented, they come to you with a proposal to collaborate, just because they realise that there’s something in it for them as well.””
Art critic and curator, Maria Rus Bojan lives in Amsterdam since 2004. Her agency, MB Art Agency constantly promotes contemporary artistic values and regularly organizes exhibitions not only in the Netherlands but also in other European countries. In Romania, Maris Rus Bojan was a curator of the Art Museum in Cluj and director of the SINDAN Cultural Foundation in Bucharest. In 2015, the International Association of Art Critics ( the Dutch branch) awarded her with the Carta AICA 2015, for the „Whispers: Ulay on Ulay” volume, written together with Alessandro Cassin.

This gets a very easy answer: I married a Dutchman. Love.

How was your start in the Netherlands?

It wasn’t simple at all. However, the practice of reinventing yourself as a person while in a new context is extremely useful. If you manage to draw some key conclusions for life and you understand your circumstances, then everything becomes possible.

I remember that during my first weeks here I got invited for a psychological test in an integration center. Next to me was a lady who didn’t know how to write or read. This was a serious issue to the staff in that center. To me, this was most likely one of the most humiliating moments I had to go through. Back then, Romania was not an EU member and I had to undergo the same integration procedure as all the other immigrants coming from Morocco, Tunisia or other places outside the EU. But I realized that for the Dutch law we are all equal and there was no discrimination made based on education or other criteria. If back then I felt deeply humiliated, in different circumstances, in a hospital, I realized that this type of approach is a very fair one, giving equal chances to all, even to those who are completely illiterate.

How do you look back on all these years in terms of integration and personal development?

I believe that even when you relocate to another city in your own country, it’s no easy enterprise. To relocate to another country implies many administrative aspects, which can be more or less pleasant. To me, all these years represent a journey of development because I feel very good here, I’ve always felt good from the very first moment. Many people ask me what I find so special about the Netherlands. I think that this country has a very favorable environment for business and personal development. For the simple reason that nobody bothers you. If you are good and talented, they come to you with a proposal to collaborate, just because they realize that there’s something in it for them as well. So, to live with people who are more intelligent than the average is always a plus.

What meant success to you before you left Romania and what does it mean now?

Success was always an abstract concept for me. Because I have never done anything to achieve success, but I’ve always done what I’ve always wanted and liked to do for completely different reasons. The fact that this or that project was successful came as a consequence. I was never interested, nor here, nor in Romania, in whether I am successful or not. I am not interested in such a thing because I realise that if you make your journey and do what you have to do, you have key achievements, you follow certain essential stages, then… Of course, you also need a bit of luck… But, in principle, success comes also through accumulation.

How would you define success then?

When I was younger, in Romania, I was the director of one of the first private art centers, I had a substantial budget to manage, I collaborated with many leading intellectuals and important artists. In 2002, I organized the first personal exhibition of Adrian Ghenie, in the gallery that I used to run. Look how successful he currently is, and how successful all the people that I started with back then are now. This makes me extremely happy. However, at a social level, it was critical to achieving success. In Romania, to be successful means to have money, social status, a function; the function is highly important, almost too important, because I can see people hanging on to their functions to the disadvantage of those around them, of communities, they don’t realise they are but a piece of the whole, not the whole itself.

My activity in the Netherlands is completely different from what I used to do in Romania. There I used to work with institutions and organizations, here I am my own boss. I had to set up my own foundation, company, and try to carve a path for myself. This was a thousand times more difficult than I could have imagined. There were moments when I wanted to give up, to do something completely different; it is hard to be an art historian and work with art. Here, in the Netherlands, nobody needs senior curators from Romania. But, nevertheless, I’ve managed to create a place for me, people appreciate and respect me. There is a certain type of respect that we lack in Romania. When someone does something and they are acknowledged for it, then the community implicitly respects them.

You’ve said you feel very good here. Why is that?

Because there is none of the aggressive intrusion that you notice in Romania. Secondly, people don’t judge you and, even if they do, they don’t dare to say anything, they keep their judgments to themselves. And it is a fair society that has fully reformed itself, having had nothing imposed upon it from the outside. You see, in the 1600s they already had their own orphanages and nursing homes for the elderly, and they took care of each other. And this says a lot. Look at their national holidays, at Remembrance Day, I was extremely touched by the way they commemorate, for instance, the heroes from the Second World War, it was such an exceptional moment! Then I realized that the Dutch, as a society, function well because it all makes sense, all the communities within the borders of this country are unified; there is an interesting mechanism that brings people together. I mean, even I, without being born and raised here, I was made to feel like I belong to this whole. 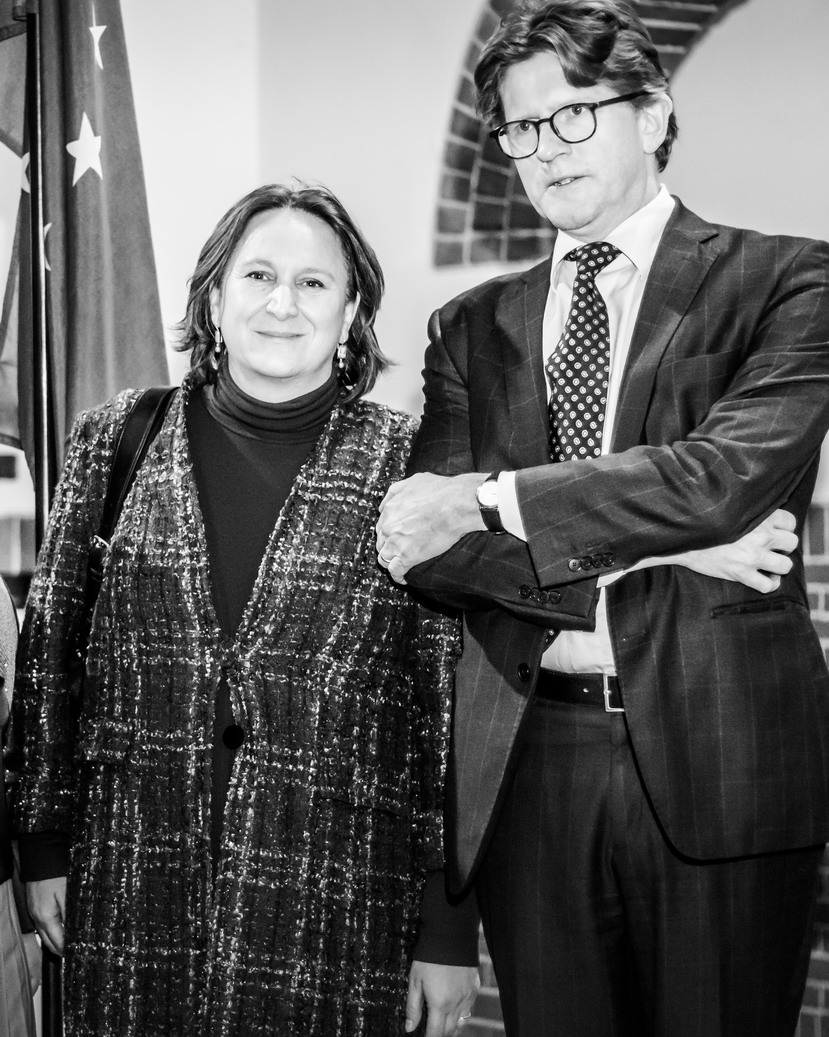 Let’s talk a bit about the Romanian community. Do you feel you are a part of it?

Of course! Everything that is Romanian is important to me and everything that comes from Romania gets my implicit support, one way or another. Obviously, here there are different degrees of professionalism and proposals that reach me. But, surely, I am very interested in getting value from my original context. I have realised that this is very important. The moment you deny your condition and identity, you bring yourself to an inferior position. And, to me, this is unacceptable.filemanager

What’s your advice to people who would like to come to the Netherlands?

It is very difficult to give advice because also here the society has changed. On the one hand, Romania is now in the EU and it is easier to relocate and access filemanageropportunities, not only here, but throughout Europe. But it is difficult to give advice because it all depends on whatever goal people have and each life journey has a particular progress, which means that the moment you generalize, that reasoning probably cannot be applied to one case in a hundred.

You have many projects every year and the one is more beautiful than the other. All these years, have you been attached to one special project here in the Netherlands?

The fact is that I’ve done so many projects that are close to my heart and that makes it impossible to pick one over another. The book you’ve mentioned was the result of a titanic work. I worked for five years on this book and I went from agony to ecstasy in relation to the artist I wrote about. The book is called “Whispers: Ulay on Ulay”. He [Uwe Frank Laysiepen, Ed.] is an extremely important artist for the European neo-avantgarde, particularly the performance and body art. He used to be the partner of Marina Abramovic during 1976-1988. Together, they have created a worldwide, very famous art legacy, exhibited in all major musea.

His individual work is less known, also because he, as a person, is rather difficult, but it seems all it took was someone from Eastern Europe to show the patience and the diligence to take notes and archive everything. I am very happy I’ve made it! I was awarded the critics’ prize; it is phenomenal because I was awarded this prize given the fact that he is a German artist living in the Netherlands… I am from Romania, and my colleague, the author of the book, is from Italy, but lives in New York and there is no Dutch author, only a Dutch publishing house. This is an extremely prestigious prize, because it is granted by the people from the association, there is a vote involved. In this association, you have all critics in the Netherlands, museum directors, all art curators and historians and all those who write about art in the Netherlands. 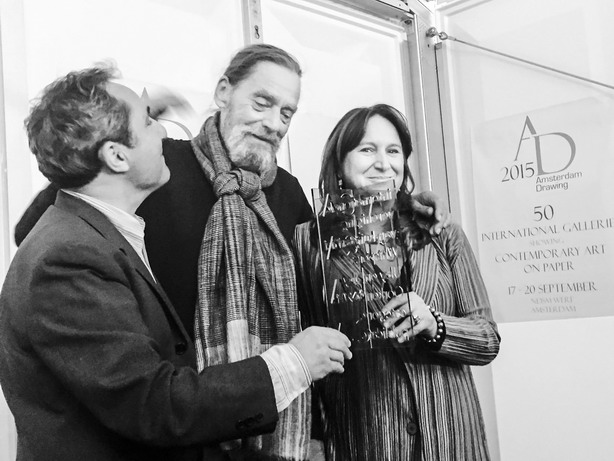 An interview by Claudia Marcu; proof-reading by Mihaela Nita