“”… ‘home’ can be anywhere, there’s only as much value in a place as people themselves create. If people want to, they’ll succeed.””
Lucretia owes her presence in the Netherlands to her daughter, Georgian, who chose to study in Eindhoven. Georgiana Manolache graduated from Computer Science at Fontys and a master from TU Eindhoven. Georgian is nowadays an assistant professor at Fontys. Lucretia studied Sociology and Psychology at the University of Bucharest. She left behind a wonderful career as an educator, but very fast she found her place in the Netherlands. At the Romanian School in Eindhoven, Lucretia works with children from Romanian and mixed families. „ ‚Home’ is where your family and those you love are. For the last five years, our home is in Eindhoven, where we got new roots”, say Georgian and Lucretia Manolache.

Georgiana: I wanted to go to a computer science university. Ever since I was in the 10th grade, I knew I wanted to study computer science. On top of that, a lot of the pupils at my high school in Galați wanted to go study abroad. I was one of those who wanted to experience something new. Initially, I was aiming for England because my colleagues tended to choose a university there, but after several conversations with my parents, but also with myself, I decided to turn my attention to other countries.

The son of one of my mom’s friends was in the Netherlands, at the Fontys University of Applied Sciences. Well, I contacted him, we talked for a bit, and then I discovered that there’s a town in the Netherlands called Eindhoven, because I only knew about Amsterdam and the Hague. Of course, I didn’t limit myself only to Eindhoven, I also applied to universities in Amsterdam and Groningen. I was admitted to all three. How did I choose? I took a car trip to see all three cities. It was my first visit to the Netherlands. Each university had its advantages and disadvantages. In the end, I chose Fontys because it’s in the Brainport area (one of the most innovative tech centers in Europe, ed.), that’s what this region is called, where there’s a concentration of research companies. It’s the most “smart” area in Europe, and the university has a very good relationship with these companies. I began to study in Eindhoven in 2013.

What was is like in the beginning for you?

Georgiana: It was easy, I chose to study what I’ve liked ever since high school. I could even say that I had a truly special path. Fontys and the Eindhoven University of Technology (TU/e, ed.) have very tight connections and many students switch from the one school to the other. I was glad I was offered the opportunity to study both at Fontys and at TU Eindhoven, which has allowed me to also begin a master’s later on. So, from an educational point of view, the beginning was very, very good for me. It was equally good also from a social and emotional point of view, if you will, because my mom has been with me. This detail mattered and still matters very much.

As for contact with the rest of the world, being a student, everything was again very simple. I have many good friends from my student days with whom I still keep in touch. The environment was very international, there were students from various countries.

Now, I work at a Dutch educational establishment, but I could say that the entourage has remained international, for the most part. Meanwhile, I’ve also learned the language. Actually, I’m still learning it. For instance, I often attend a Dutch pub quiz.

And your mom is still with you, here, in Eindhoven. What was it like in the beginning for you, Lucreția?

Lucreția: My husband is a sailor. Before coming to the Netherlands, we thought about what might happen with him while away, sailing alone, with me alone at home, and with Georgiana studying alone in Eindhoven. So we decided that the two of us would relocate and make a home in the Netherlands.

Our trips abroad began when Georgiana was eight years old. My mother worked for ten years in Madrid, in Spain. As a primary-education teacher, I was fortunate to enjoy long and marvelous holidays. From the 1st of July and until September, we would spend our holidays at the grandparents in Madrid. That was our first contact with foreign countries. I noticed that I always had an easy time transitioning whenever we changed places. Of course, in Spain it was much easier thanks to the language.

The beginning here, in the Netherlands, was also very nice. I saw this move as an opportunity. We found this studio, we furnished it, and now it’s our nook where we feel good. The first few months felt like an extended holiday, every day I enjoyed Georgiana’s stories. It was also back then when I met many of her colleagues, they were always invited here and I was like a mother to them. I could hardly wait for Saturdays and Sundays to arrive so I could ask them “What shall I cook for you this time?” After that, I found it a bit harder, but I found a group of very warm-hearted people, who wanted to do beautiful things for children (the Romanian community in Eindhoven, who founded the Romanian weekend school, ed.). It was just what I needed.

To understand how I interacted with other people from outside our Romanian group, I’ll tell you about the incident with our neighbor. At some point, beneath us, there used to live a university lecturer. The person who helped us find this studio told me: “If you want to learn Dutch, there’s a university lecturer here that might be able to help you.” But I didn’t act on that right away, I was busy with other things. One day, a strong storm blew down a rack on the balcony, on which there was a brush, which ended up in Evert’s – our neighbor – balcony. He took us by surprise when he showed up at the door, holding the brush in his hand. We invited him into our home. My husband had just come from Romania, with a load of Romanian products from my parents. We had an authentic Romanian meal and we invited him to join us. That’s when we truly got to know each other. He was so surprised and he told us that he never imagined that just by returning a brush such a bond could develop between people. So, that’s how the contact with the Dutch society began, via our neighbors.

Georgiana, how did you come to teach at the university from which you’ve graduated?

Georgiana: I was approached by the director. He told me that they needed an assistant professor and that everyone recommended me. And I said why not, even though ever since I was little I told my mom – who is a teacher – that I’d never want to be a teacher. That’s because I saw how dedicated she was and how much she worked at home to prepare the lessons.

But I accepted the offer because, unlike my mom, who was educating children, here I don’t educate the students, I’m helping them to move forward. That’s how I began to teach and I discovered that I like it. I teach only what I want, only the courses that I like, it’s a pleasant atmosphere, I feel at home because I studied there for four years, my lecturers are now my colleagues, it’s a truly special experience.

How are the relationships at work?

Georgiana: The Dutch are very open to anything new. We’re talking all the time about how we can improve programs, how we can make them better and more attractive. The lecturers have the freedom to prepare the courses as they see fit, as they think best. Last year, in September, I had more to do with the didactic system, when I had to prepare a training course for those who wanted to become lecturers at Fontys.

The relationship with my colleagues is very good. There are both tenured lecturers and assistant professors, like myself, who teach the course as designed by the tenured lecturers. The relationship between these two categories is very open. It doesn’t matter how you go about teaching the course as long as the goals are achieved. And the fact that I was their student and now I’m their colleague doesn’t matter. Of course, in the beginning they would joke and ask me “So, what’s it like to be Bert’s colleague now?” Well, it’s great, I like it! I’ve never felt that they see me as a former student or a novice teacher, I was never treated in a different way, I perceive it as an equal relationship.

Lucreția, you’re involved with the Romanian School in Eindhoven. How did you feel about this change?

Lucreția: Yes, it’s true. Ever since 2014, this has been my workplace, if I can call it like that. It’s a very beautiful challenge. There are children from Romanian and mixed, international families. I’ve worked a lot with them, I’ve experimented during each class, to see how I could pique their interest to learn Romanian. I’ve used play a lot, as it brings out a child’s qualities.

I’m greatly looking forward to Saturdays, but they’re also enjoying coming to our school. Many parents told me they’re happy to see that after a year their children can easily communicate with their neighbors’ children in Bucharest, Cluj, Arad, with their Romanian cousins, with their grandparents. Let’s not forget that for these children Romanian is a foreign language.

In turn, I also learn every time something new from the kids. For instance, I write a Dutch word every time on the corner of the whiteboard. Some of them I write on purpose correctly, others not. And they immediately notice and they draw my attention: “Lucreția, that’s not how you write it.” And I ask them: “If I made a mistake, what shall I do?” To which they reply: “Your punishment is to give us what you’ve got in your bag.” And I have something every time: biscuits, cookies, doughnuts, buns… And I have to be very careful when I count how many mistakes I make, so that I have enough to pay for all of them.

Lucreția: We like how they celebrate certain holidays. Liberation Day, for instance, or Carnival. The Dutch truly rejoice with each occasion, even on King’s Day. They’re out on the streets, they’re everywhere. We mingled with them at some concerts, they sing and dance regardless of the age. People have fun, they enjoy every event! When the Eindhoven football team won the championship, you can’t imagine what it was like here! I would say I like everything. It’s a society that offers me the chance to prove to myself that I can do many things.

Georgiana: Professionally, it means doing what I like and finding that very easy. Socially, I’m successful if I get along well with those around me, if my family is close by and if life goes smoothly.

Lucreția: Success is something in which at least two persons take part, two selves, one of which being God, who is near you and understands you. Success is when those around you are pleased with you because you’ve done something good for them and you’ve seen them smile. To me, that’s all it takes.

Georgiana: To know what they want and they’ll make it.

Lucreția: From my point of view, “home” can be anywhere, there’s only as much value in a place as people themselves create. If people want to, they’ll succeed. 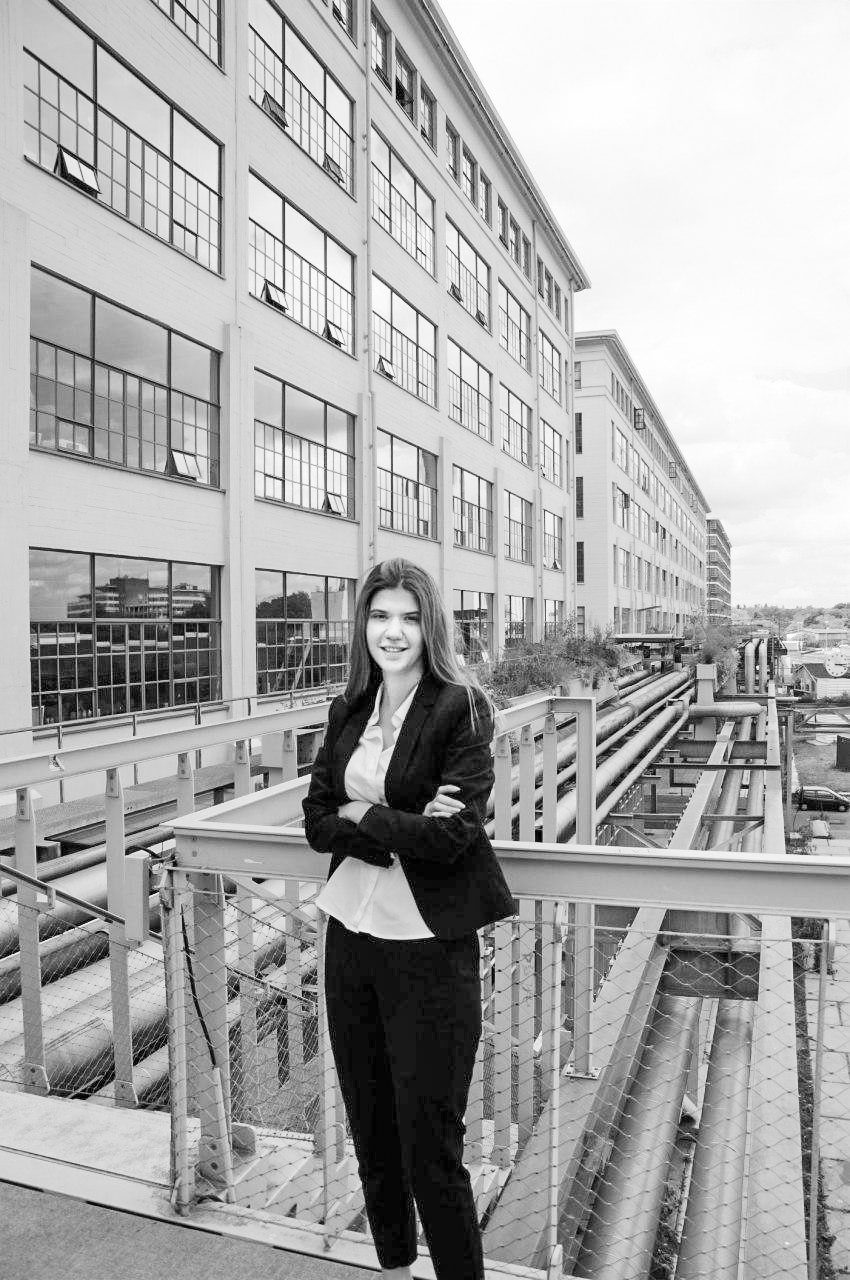