“It’s a place where I feel that I’ve come to do what I like. You can achieve that American Dream, although the Netherlands is not America. Meaning, you’re really able to do what you want, when you want, to even take a risk. It’s a place where my creativity is blossoming.”
Elena van den Berg – Poenaru was born in Râmnicu Vâlcea, but she grew up in Bucharest. For four years she studied at the Art School Tonița and after that, she graduated Gheorghe Lazăr High-School. Later on, she graduated from the Construction Faculty, also in Bucharest. For 20 years she is working in marketing and sales. She lives in the Netherlands for the last 15 and in the last 5 years, she was focused on social media projects. Recently, an older dream came true: Elena has her own business – Dutch Media Doors.

I came here 15 years ago, in December 2002, at the invitation of my future husband – at the time. Back then, I didn’t have any idea what the Netherlands meant. In other words, it was the love for a man that brought me here, although my husband told me that he would have moved to Romania, if I hadn’t liked it here. But I did like it, so I stayed. It was my choice.

Two words come to mind: agony and ecstasy. There were ups and downs. I left behind in Romania a good job in an international company in downtown Bucharest. I came into the unknown, where I had nothing, in a provincial town, where I didn’t know anyone but my husband. But I knew that it would take quite some time until I’d find my way in this country. I mean my professional path, of course. As such, I wasn’t scared about all this. I was full of initiative and I started taking part in all kinds of cultural and volunteering activities.

It was difficult, first of all, because I didn’t know what the Dutch society was like. Until I found the key to unlock the door. By that, I mean removing any obstacles, including speaking in English. For three years, I spoke only in English, I even actually refused to speak in Dutch, although I did do language courses. I thought that I wasn’t speaking it at the level that I wanted and, as such, I refused to speak at all. It was a friend from Colombia that gave me the wake-up call when she said: “Elena, stop stressing! They should be happy we’re speaking this language of theirs that’s so difficult. You are allowed to make mistakes.” From that point on, I decided to speak Dutch, with an accent, of course, which everybody thinks it’s Belgian.

To me, the language was the key to the heart of the Dutch society. I think it’s very important that those who come here take this step and learn the language. You can better understand some undertones, you understand the mentality, you can read the newspapers, you can follow the news on TV, you stay up to date with what’s going on in the country. During that time, I was even reading Dutch forums, so that I could understand how the Dutch speak to each other. In school, we were given a piece of advice that I initially thought was childish – to watch Goeden tijden, slechte tijden (Good times, bad times, ed.), a Dutch soap opera similar to The Young and the Restless. I didn’t watch it, because I don’t like that kind of series, but I decided to apply another method: interact as much as possible with Dutch people. I did a lot of volunteering and for two years I worked for an organization that helped abused women. Then, I also worked at my husband’s company and, like that, I came into contact with Dutch customers. I started to speak the language, including with my husband, but also with my first child, so I was interacting on all fronts.

What did you find simple?

I like art a lot – I graduated from the Nicolae Tonitza Fine Arts High School in Bucharest – and I like architecture, old cities, history, so the Netherlands seemed to fit me like a glove. To me, this country is like a dollhouse in which I love living, and even if I already saw one of its rooms, I will surely go and see it again. I also very much like the Dutch landscape, which gives me the feeling that the Netherlands is like a painting. I remember how, especially during the first year, I took maximum advantage of every possible free day. Together with my husband, I traveled almost through the entire country. I could say that I saw all the 12 provinces.

In other words, you feel good here. 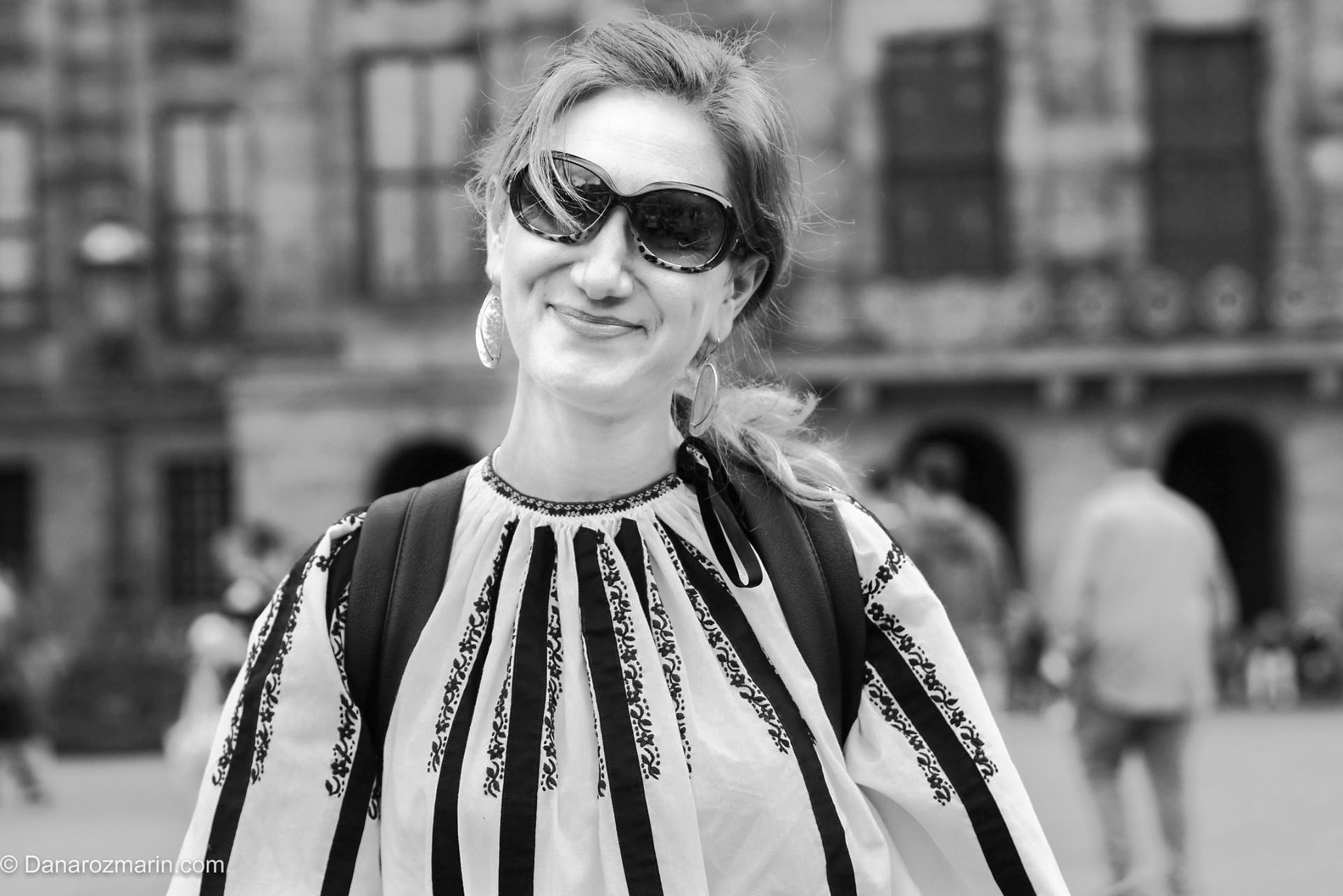 What have you learned from the Dutch?

I’ve learned quite a lot. I’ve grown, I’ve become more mature. Before coming to the Netherlands, I was a pretty impulsive person, I was quite a Balkan. Here, I’ve learned what balance means, I’ve learned how to temper certain reactions of mine. I learned from them the saying zand erover (forget about it, water under the bridge, ed.), which means to be able to get over unpleasant events or situations in an easier way.

I’ve learned how to be tenacious. The Dutch don’t give up easily on what they set their mind to, even if they come across obstacles. Sure, they also have their less good sides. For instance, they don’t easily show their feelings, they don’t externalize themselves like we do.

What I sometimes miss is a certain logic. They are so specialized and focused on certain fields, that I have the feeling that sometimes the overview is lost. And maybe they don’t even need this overview, since they’re such practical people.

On top of the volunteer work at the women’s organization, I know that you’ve also helped women in a different way. Tell us a little about that.

Yes, after having worked at my husband’s company, I felt the need to work for a company where I could interact more with the local job market. The company that I found – and where I worked for ten years – organized various events and conferences. In 2013, there was a project dedicated to women who needed to reintegrate in the workplace after having lost their jobs at a later age. That’s also when my relationship with social media began. I would organize for these women weekly meetings and workshops on various topics. That’s when I held – for the first time in my life – a workshop on social networks. I would teach them, for instance, how to use LinkedIn to find a job. I realized that it suited me, which gave me the courage to get out of my comfort zone and try to do something for myself, to no longer be an employee. During this project that lasted for two years, I met a lot of women from Deventer. Now, I have a very large network, and whenever I go into town, for sure I come across someone I know. My biggest satisfaction is that I managed to convince these women, who are over 40 years old, to use social networks not only professionally, but also for their own personal gain.

It was a project that – as I said – gave me courage, that opened a door for me, and now I’m working for myself. I think it’s important, at a certain point, to be able to follow your dream. Mine took shape ten years ago, but I didn’t have that courage, I lacked the inspiration, and I didn’t feel ready to take that step. Now, I’m ready to work as a self-employed at Dutch Doors Media. I’m even more prepared even for a failure. My journey, ever since I’ve been here, has been like a sinusoid, at times going up, at times going down, and there were various moments when I thought about going back to Romania, but now I feel good, I feel I can even accept the possibility of not making it.

To me, success means a journey, not a destination. I don’t believe you’ve achieved success only once you’ve reached the end of the line. To me, success is the path that you follow, that gives you satisfaction, that is a creative process. I think you have to be creative in order to be successful and to also become an inspiration for those around you. I would like to say, however, that I care a lot that the process be authentic, genuine, and true to my principles. If this doesn’t happen, then it’s a superficial kind of success.

I have mixed feelings. It’s dear to me, but, at the same time, I haven’t interacted with the community that much, not for the past two years,  at least. But, of course, ever since I came to the Netherlands, I’ve had Romanian friends and I still do. I even had an initiative: between 2014-2016, I organized in Amsterdam the Day of the Romanian Blouse. Afterwards, I kind of unintentionally distanced myself. I’ve noticed the past few years that a community has started to be knitted together and I think it’ll be good. 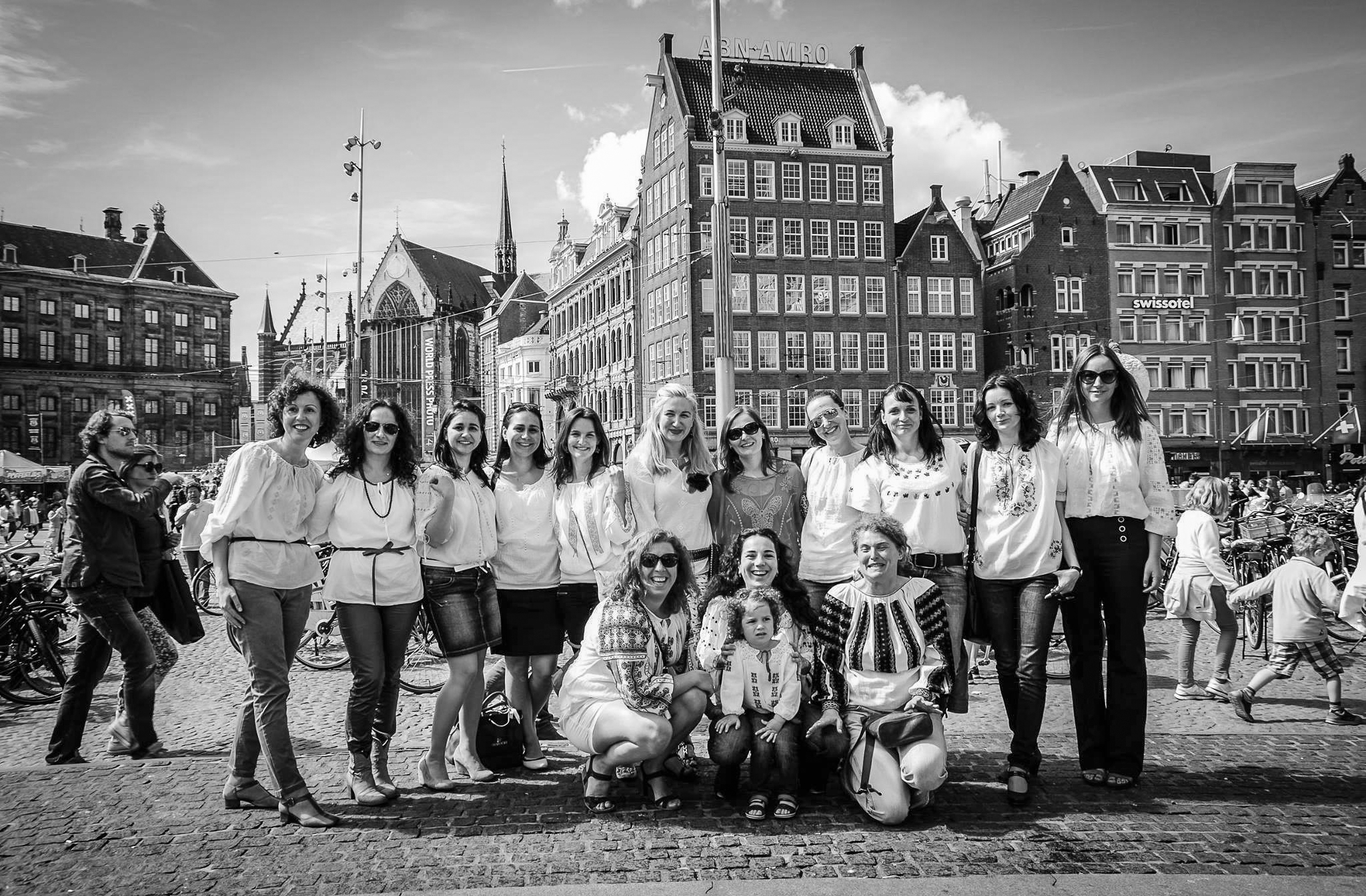 I would say that I’m a universal child. If tomorrow I were to move to France or New Zealand, there wouldn’t be any problem. My family is my home.

I don’t really like to give advice. I think that everyone has their own set of principles to guide themselves by in life. And, yet, I would say two things that I find important. The first: they should be brave and full of initiative, they shouldn’t wait for anything from anyone. The second: they should learn the language.